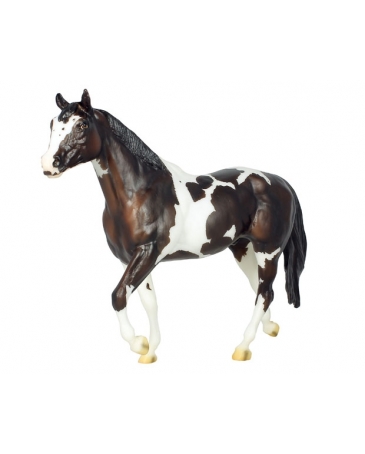 Add to Wishlist Send to a friend

Send to a friend 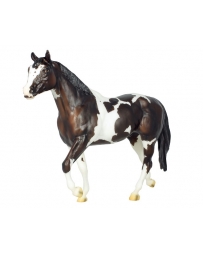 Chocolate Chip Kisses is a colorful pinto pony that has made big dreams come true for his owner/rider 14-year-old Lauren Demchuk. Known as Choco, Chocolate Chip Kisses boasts a strong Breyer heritage! Both his grandsire, Zips Chocolate Chip, and great grandsire Zippo Pine Bar, are Breyer portrait models! Unlike his Quarter Horse grandsires, Choco has made his name in the Pinto world, where he measures as a pony and competes against horses larger than himself! When Choco enters the ring, he exemplifies brilliance, presence and charisma, which is evident by his winning show record! Beyond their winning ways, Choco and Lauren have become an inspiration to people of all ages and backgrounds. Lauren was diagnosed with a rare cancer called epithelioid sarcoma just a few months before the Pinto World Championship Horse Show. Even after receiving the news, Lauren, along with her trainer Karen Clark, focused on her goal of attending the world show and once there, Lauren and Choco excelled in class after class. Together, they have an impressive list of titles including: 28 Pinto Horse Association of America (PtHA) World Championships, three PtHA Reserve World Championships, two PtHA World High Point 18 & Under Pony, PtHA World High Point 18 & Under English, PtHA World High Point 18 & Under Western, 4th in the nation for Junior Youth High Point and a multitude of regional and local wins.

BREYER CARES: PORTION OF THE PROCEEDS WILL BE DONATED TO: ST. JUDES CHILDRENS HOSPITAL

Be the first to write your review !

Booty Up™ by Wrangler®